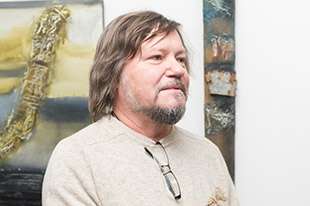 Olexiy Malykh’s track record includes a number of personal exhibitions and group shows in Spain, Poland, Hungary, Slovakia, Bulgaria, Chile and other countries. “Each plein air tells a different story, the format and atmosphere of each are different. Each time an artist embarks on a new project. I would like to use my own example to show how plein air events can transform the works of the same artist” – explains Olexiy Malykh.

The artist participated in about 20 local and international art festivals and plein air events, including those in Chile, Croatia, Bulgaria, and Germany.

The exhibition is organized by Sky Art Foundation and runs until January 20th, 2016. Around 30 art pieces by Olexiy Malykh are on display, including never seen before ones.

“One of the main tasks of the Foundation is to organize large and small plein air events and symposiums. Therefore, the exhibition by Olexiy Malykh is an important and symbolic project for us. It will highlight the creative potential of the artist during different periods of his life, as well as show the influence of plein air movement on the development of Ukrainian art and culture”, – says Dmytro Palienko, philanthropist and founder of Sky Art Foundation.

Olexiy Malykh was born in 1956 in Berlin. In 1981 he graduated from the graphic arts department of Moscow State Pedagogical Institute. His first exhibition was held in 1979. Since 1995 his is a member of the National Union of Artists of Ukraine. Since 1996 he is co-curating the “Spring Wind” project. Malykh also works in various art forms, including graphics and installations. The artist is currently living and working in Kyiv.