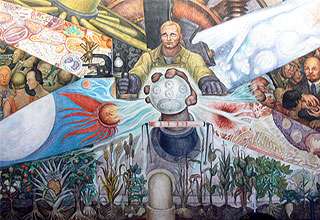 Murals as a part of street art culture became and stay a strong trend all over the world. When we talk about murals we suppose more complicated artwork comparing to graffiti, for instance. It is believed that the tradition murals formed under the influence of Mexican artists – Diego Rivera, David Alfaro Siqueiros and Jose Clemente Orozco.

For the last decade murals took a special place in the world of street art. Nowadays the most progressive cities such as New York, Berlin, London are attracting the best artists from around the world to decorate the walls with murals. For the several years Kyiv and other cities of Ukraine supporting global art process by inviting the world-famous street artist in Ukraine. Dozens of murals have been created, more artworks have to be done. In particular, around 30 murals, installations, sculptures to be created within the First International Festival of Contemporary Art in the public space called Mural Social Club.